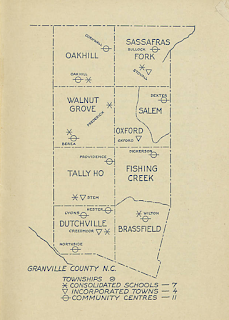 In my continuing search for clues about the origins of my Herndon women of Oxford, North Carolina, I decided to engage in some brute force analysis. I still only have been able to locate my Harriett in the 1900 and 1910 censuses. Based on these two documents, Harriett was born in either 1857 or 1865 (or somewhere in between). So she had to exist somewhere prior to 1900!

I've run straightforward searches in the census databases for 1880 and 1870, but to no real end. She doesn't pop up in either. Ohhh what I wouldn't give for an 1890 Census!

I've also hired a professional genealogist to do a few hours of digging. Unfortunately, that led to a dead end as well.

So, I'm back to square one and have decided to go at this from another angle. I created a spreadsheet that lists every Herndon in Granville County from 1860 to 1900. I had hoped that by analyzing this data I would find some clues and connections, but before I could get that far I stumbled upon something unexpected.....there was only one (1) Herndon family (listed on the census) in Granville in 1860, and they were white.


After the end of slavery, beginning with the 1870 census, there were quite a few Herndons living in Granville, but all of them were listed as black or mulatto, with the exception of the one white family from the 1860 census. So what does that mean?!?! Could all or most of these people have been held as slaves by this one Herndon family?

Indeed, I found these same Herndons listed as slaveholders in the 1860 census -- 38 people listed in all. They also were the sole Herndon slaveholders in Granville in 1850 -- 58 people in all.

Up until now I had been proceeding under the assumption that this white Herndon family held my Herndon family, but it was just a theory. After this revelation I'm beginning to think that I should put more stock in this.

I have looked into this family a bit, and they are....intriguing, to say the least. And I've been told that more than one of the clan took women, who were being held as slaves at the time, as their....lovers? mistresses? concubines???  Whatever you want to call the union; I just can't bring myself to believe that they were marriages or partnerships in any way shape or form....but perhaps I'm wrong.


These are the details that I know about this Herndon family (I've only listed the males):

From what I've found so far, neither Rhodes nor Henry Clay ever married (but see the comments section of this post). They, however, were an economic force in Oxford's creation and growth; Rhodes more than Henry. I believe some of their other brothers -- and there were many -- also held land and slaves as well at some point, but in 1850 and 1860 I've only seen mention of Rhodes Nash, Henry Clay, John Randolph and Duncan C. Herndon.

I did find the will of Rhodes Nash and was hopeful that my Harriet might be named in it. Unfortunately, she was not. She was born in a particularly difficult period, for my research purposes. She's too young to be identified by name in Rhodes's father's will (assuming she was a part of their plantation earlier) because Zachariah died in 1834. And she may not have been alive yet or may have been too young to have been listed by name is Rhodes's will, because he died in 1863.

My next steps will be to:
To be continued....