One of the most difficult (current) termination points in my tree is my great grandfather, Thomas Carr Rollins. To have a termination point that close is so frustrating, but somewhat understandable given how old he was when my grandfather was born. Indeed, he was born during Slavery times in the US . . . a point I share with others to demonstrate how not so far removed we are from that period of history.

Recently, I stumbled across a printout from an old Family Reunion booklet that talked about him: 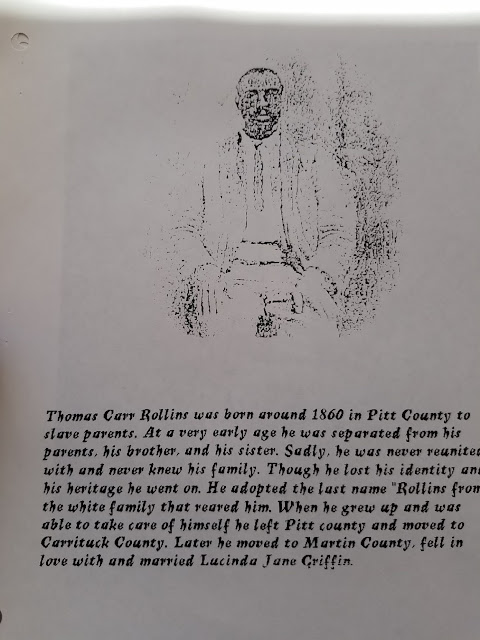 "Thomas Carr Rollins was born around 1860 in Pitt County to slave parents. At a very early age he was separated from his parents, his brother and his sister. Sadly, he was never reunited with and never knew his family. Though he lost is identify and his heritage he went on. He adopted the last name "Rollins" from the white family that reared him. When he grew up and was able to take care of himself he left Pitt county and moved to Currituck County. Later he moved to Martin County, fell in love with and married Lucinda Jane Griffin."

When you know so little about someone every little piece of information is gold. Before I started researching my great grandfather, I only knew a few things:  his name, who he married, and the county from which he was supposedly from. From this I began my research piecing together a slightly bigger picture of his life. The exciting part is that much of what I've found is supported by this old write-up!

Here's what I've gathered so far (in chronological order):


That's all I have, but I'm grateful for even having that much! Finding his brother was a shining moment in my research journey. Unfortunately, I haven't been able to find much else about his brother Benjamin after finding his marriage record in 1888. No children and no subsequent appearances in the census.

Likewise, I haven't been able to find anything else about the white family with whom Thomas was living -- James and Marina Rollins. I've asked around in various genealogy groups, as well as searched historical books for Pitt County in that time period, but to no avail. Given that the older children in the family were domestic servants, it's possible that the family wasn't well off enough to have significant records. But with that many children, I would've thought someone would have survived to today and might be doing research. I'm still hopeful on that front.

Will continue to try to track down that family and information about that family because, unfortunately, I think that's the only way I will be able to find out where Thomas came from and what happened to his family.