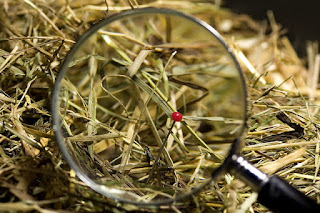 I've been working on a lot of "needle in a haystack" research lately, with the help of some awesome local researchers I found on AncestryCloud.com.

One area that I'm pursing now to try to break through the 1860s brick wall, is land ownership. Some of my relatives, I have found were blessed to be owners of real property soon after (and maybe even before) the end of slavery.

I knew that my g-g-g grandfather Hardy Griffin was one of those property owners. I first became aware of this when I found his Last Will and Testament, in which he bequeathed multiple tracts of land to his three surviving daughters.

My hope was to identify the location of the land, and trace back how he came to be in possession of it. To my surprise, g-g-g grandfather Reddick bought and sold a number of properties in the late 1800s. Because the land back then was described with references to the existing topography and other landowners, it's very difficult to figure out, (a) where the land was located and (b) if any of these conveyances were the tracts of land that he bequeathed. My other intention was to trace the land back to see who owned it previously and if my g-g-g grandfather was bequeathed any land. However, it looks like that may be difficult as well. Alas, the search continues....

Here's the oldest land conveyance that I found for Hardy Reddick, followed by my transcription of the handwritten text in the images:

Know all men by their presents that I Archibald H. Coffield Administrator of Noah Reddick dec’d by virtue of authority vested in me the Judge of the Probate Court for the County of Martin and the Land belonging to the estate of said Noah Reddick to make assets in my hands to pay the debts of said estate and in conformity with said authority I advertised according to the Law sold the different tracts belonging to said estate on the 6th of March 1871 and at said public sale one tract among others was sold to Hardy Reddick the last + highest bidder at the sum of Two Hundred + Six Dollars.

Now for and in consideration of the sum of Two Hundred + Six dollars to me in hand paid by the said Hardy Reddick the receipt whereof is hereby acknowledged I the said Archibald H. Coffield Admin. of Noah Reddick dec’d have this day bargained + sold + do by these presents bargain sell and convey to the said Hardy Reddick his heirs + assigns the following tract + parcel of land lying and being in the said County of Martin butted and bounded as follows Commencing at the sign Post near Wm. (?) Hadly’s [?] up the Williamston road to W. J. Hardisons line thence along his line to the Mill road thence down said Road to the Beginning. Containing Fifty acres to the same more or less it being the land known as the [Modlin ?] tract. And I the said Archibald H. Coffield Amin. of aforesaid for myself and my heirs + assigns warrant + defend the right + title in + to the above described tract of land to the said Hardy Reddick his heirs + assigns in as full + ample manner as I am authorized to do by authority vested in me. In virtue whereof I have hereunto set my hand + seal this 7th March 1872. Signed sealed + delivered in presence of Jos. A. Biggs.

The condition of the above sale of the specified property as above described and lien on crops upon condition + intended as a Mortgage to secure the payment of an account on the books of Wm. H. Carstarphen amounting to One Hundred + Sixty + 23/100 dollars and all advancements to be made to the said Reddick by the said Carstarphen not to exceed the amount above specified. Now therefore in case the said Reddick shall will and truly pay off + discharge the said account + whatever may be due for advancements by the 1st day of January 1873 then said bill of Sale + lean on Crop shall be void but if he fails to pay, the said Carstarphen shall take into his possession the property herein conveyed and the Crop to be raised by the said Reddick + sell the same for cash after first advertising in the public places in the County + first pay himself all that may be due under the contract including the stamping and Registering of this instrument and the balance if any to the said Reddick. In testimony whom the said Reddick has hereto set his hand on this 22nd day of July 1872.